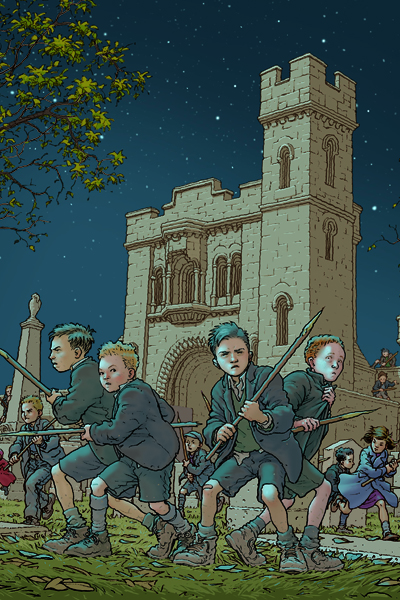 Over 50 community performers will take to the Citizens Theatre’s stage on 28 and 29 October to perform The Gorbals Vampire, a new play by Johnny McKnight inspired by extraordinary real life events which took place in the Gorbals over 60 years ago. The performances are the culmination of a 10-month long project which has involved local people, school children and the general public in a range of workshops, exhibitions and creative writing competitions inspired by the story.The remarkable true life story of The Gorbals Vampire took place in Glasgow’s Southern Necropolis in 1954. One September evening, hundreds of children armed themselves and descended on the graveyard to hunt down and kill the ‘Man with the Iron Teeth’ who they believed had abducted and eaten two local boys. This entirely fictitious story started as a playground rumour but rapidly spread across the city, leading to widespread moral panic about the dangerous influence of American horror comics, and ultimately resulting in the introduction of major new censorship laws in the UK.Since January 2016 the Citizens Theatre Learning team has delivered a range of work inspired by the story to involve as many people in the project as possible in addition to the performers on stage and our free exhibition will feature artwork, creative writing and behind-the-scenes information about how the show has come together, as well as exhibits revealing more about the Gorbals and the Southern Necropolis at the time of the events.The exhibition will be on in our Stalls Studio and open to the public at the following times: Wed 26 & Thur 27 10am - 6pm Fri 28 & Sat 29 10am - Curtain up

Find out more about the project strands.

Previous entry: The Cheviot, The Stag and The Black, Black Oil