The Ching Room / The Moira Monologues 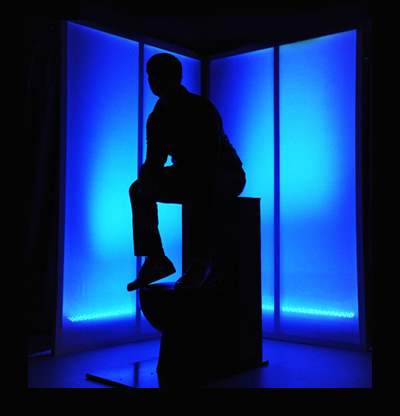 When you've got to go, you've got to go. But not if you're Rory, and there's a weird and dangerous stranger in the cubicle who seems to know too much about your secrets and wants to introduce you to the mysterious 'Boss Ching'. What results is a battle of wills and wits, as Rory realises too late the peril he's in and, even worse, starts to like it. Can Rory escape before the stranger tempts him into crossing a line that will change his life forever?

“The sort of scatalogically amoral attitude to drugs not seen since Trainspotting mania was at its height.”

TIMES WHEN I BITE: THE MOIRA MONOLOGUES

Alan Bissett performs his own one-woman show, a series of stories from Falkirk's hardest woman, Moira Bell. Whether defending her 'snookelums pookelums' from the local rottweiler, attempting to seduce a teacher in the school where she works as a cleaner, or belting out Diana Ross for the Scotia karaoke night, Moira is hilarious and heart-warming company.A thoroughly entertaining performance from one of Scotland’s most exciting young writers."One of the undoubted highlights of the Aye Write! Festival." The Skinny"Alan Bissett has talent to burn. Not only does he write novels that have people uttering words like "virtuoso" and "genius", he clearly puts as much stock in performing his words as he does in getting them down on the page in the first place." The Scotsman

First presented as part of Oran Mor’s A Play, A Pie & A Pint series.

Induction LoopFirst presented as part of Oran Mor’s A Play, A Pie & A Pint series.PLEASE NOTE THAT THIS IS AN ARCHIVE ENTRY. THIS SHOW IS NO LONGER ON SALE.