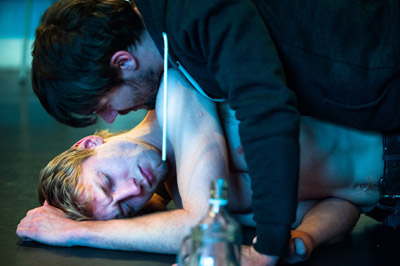 Stewart Laing, who directed The Maids last year on the Citizens main stage, returns with a new production of Pamela Carter’s play Slope, originally produced by Untitled Projects in 2006 and re-conceived for an intimate studio setting.Slope explores the love affair between the 19th-century poets, Paul Verlaine and Arthur Rimbaud and its impact on Verlaine’s young wife Mathilde. Their verbal sparring is scabrous and hilarious, and their rollercoaster relationships as passionate and claustrophobic as they are cruel and ridiculous.Tune into the Kiltr livestream on Wed 19 November for a live tweetalong from 7.30pm #Slope as part of #lovetheatre day.Part of Glasgay! 2014Untitled Projects in partnership with KILTRDOWNLOAD the Slope programme

“as bold as anything seen in the Gorbals theatre.”
The Herald ★★★★

” if it doesn’t make me feel uncomfortable, then I’m not that interested in it” Writer Pamela Carter in The Herald

“… the three of them enact a cruel battle for status, order dueling with chaos, decorum with sensual pleasure”
The Guardian on Slope (2006) ★★★★