h Into That Darkness | What's On | Citizens Theatre 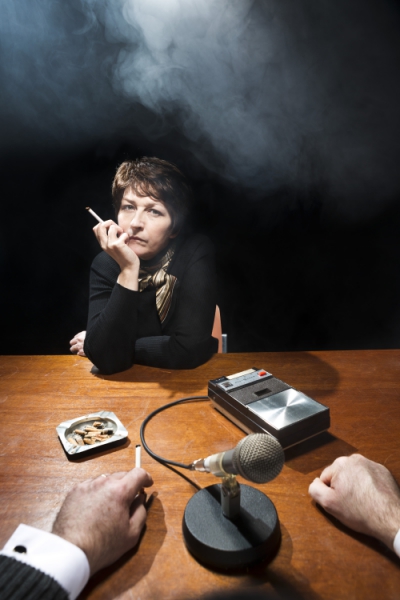 SS-Obersturmführer Franz Stangl oversaw the deaths of nearly 1 million people in Nazi extermination camps.Following his conviction for the murders in 1970, historian, biographer and journalist Gitta Sereny interviewed Stangl to understand how an individual rationalises their actions in the face of a crime of such magnitude. This is the dramatisation of those chilling and harrowing interviews.Shocking and disturbing yet vital, Into That Darkness looks into the very heart of evil and asks how, 70 years after the end of the Second World War, we can prevent atrocities of this scale from happening again.Writer Robert David MacDonald was one of the three artistic leaders of the Citizens Theatre from 1971 – 2003 during the period when the Citizens first became famous around the world for innovative productions of classic texts and challenging new works.Directed by Gareth Nicholls, Main Stage Director in Residence. Read about his appointment here.

Into That Darkness: Curtain Raiser

Thu 21 May, 6pm - 6.45pm Director Gareth Nicholls in discussion about how individuals become capable of horrific crimes, and the role of their biographers.MORE INFO

“superbly acted drama is a meticulous, compelling triumph” The Guardian ★★★★★ “superb production… magnificently captured” The Scotsman ★★★★★ “gripping” TV Bomb ★★★★★ “a production that will keep you engaged long after the house lights come up” The Public Reviews ★★★★ “a thrillingly mesmeric meditation on human cruelty.” The Herald ★★★★ “The ensemble is highly skilled and committed, with Duff in particular adding yet another beautifully textured portrait to her gallery of multifaceted women. “ The Times (£) ★★★★ “an absolutely unflinching journey” The List ★★★★ “painful, raw emotion carried beautifully by its two leads” TYCI

“we’re going to give the audience a piece that’s every bit as intense as the book.”
Claire Black speaks Blythe Duff about her role as Gitta Sereny in Into That Darkness Scotland On Sunday

“That is why I think now, on the 70th anniversary, it is important to bring another generation into at least thinking about and contemplating it.”
Blythe Duff discusses the importance of staging Into That Darkness with Steve Hendry Sunday Mail

50p tickets on sale Sat 16 May, 10am
See Pricing for all prices, concessions and offers inc. Season Pass and 50p tickets

INTO THAT DARKNESS TRAILER

Into That Darkness production photos

Into That Darkness rehearsal photos

If you are deaf or hard of hearing, we want to make sure you can enjoy the best night out at the Citizens Theatre.
Find out more about the Deaf Theatre Club.


Next entry: Into That Darkness: Curtain Raiser

Previous entry: Lunch on the Southside